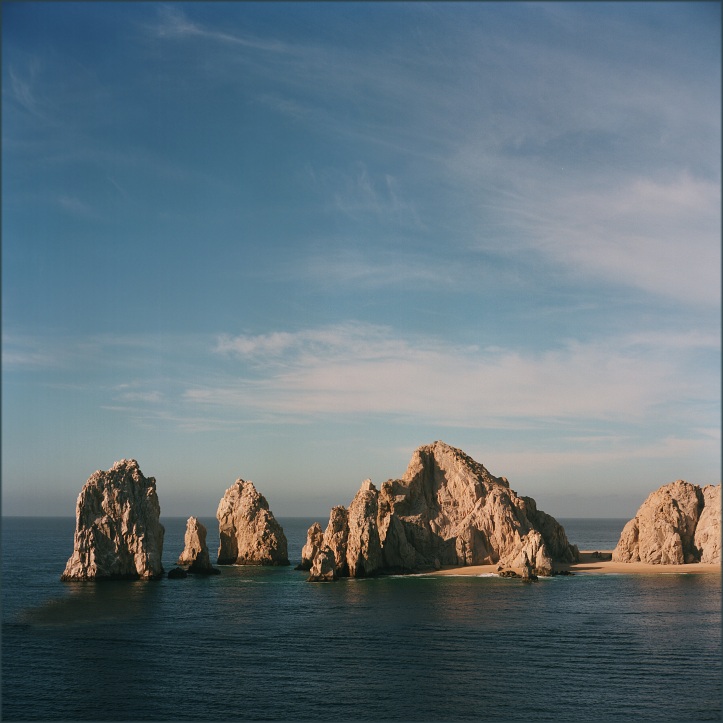 I shot this from the top deck of the cruise ship as we slowly drifted into port in Cabo San Lucas.

The early morning sun giving texture to the Lands End cluster of rocks was a promise of adventure and fun for the day.

We pulled up to a school in the Dominican Republic and all of these kids spilled out to see us. Although their school was a ramshackle building without windows and a dirt playground with chickens in it these kids were clean, and in uniform.

The one in front was the leader. Could you tell? 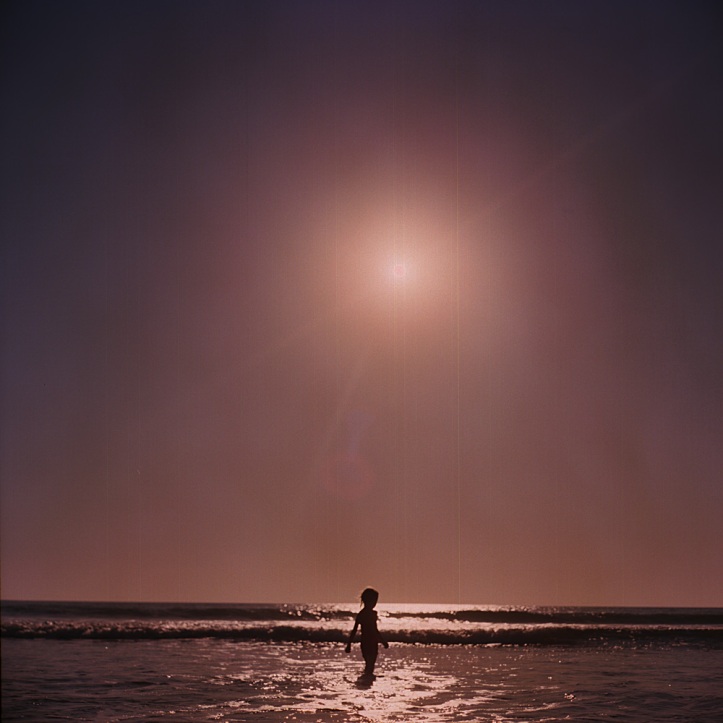 Anytime we go to the beach I take my camera along. Sometimes I use it, sometimes I don’t. On this day I visualized this image and pulled it out. I took one exposure and back in the bag it went.

Your mind is the best photograper in the world. 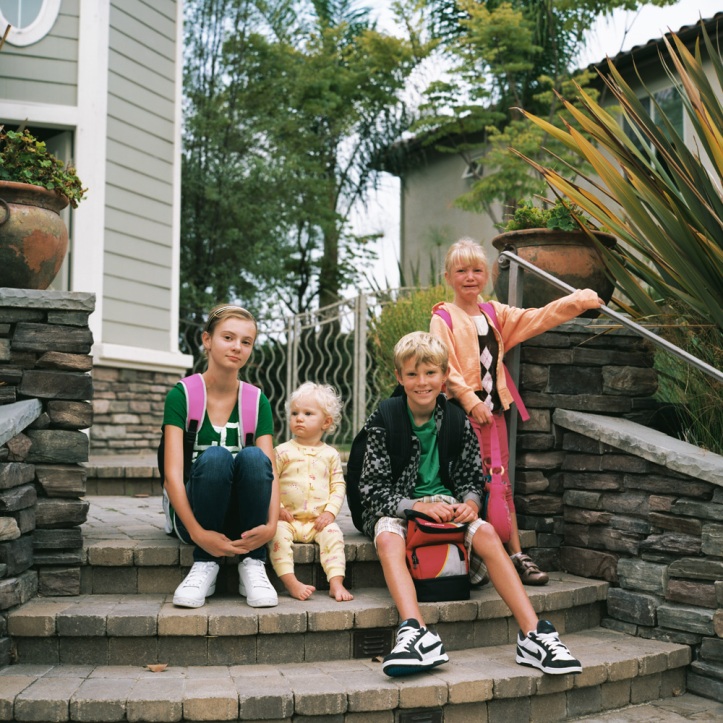 Four kids, four different responses to the stress of the first day of school. One crying for the fear of missing her ride. One smiling to see his old friends, one satisfied to be starting in the highest grade in the school.

The last one following her siblings, not knowing that a season of being alone each day all day was upon her.

Every child has a desire to win a footrace. Here the desire ranges from despondant to focused attention on the starting pistol. The desire to win is demonstrated here in a perfect range going from the outside to the inside of the track.

Joe volunteered to watch the kids by the pool. Because someone has to do it.

In Orange County California everything is cut, dried, catagorized and labled.

Seeking adventure the only place the boys could find it was in the drainage ditches around the neighborhood.

All those claims on the liscence plates around San Clemente “worlds greatest climate” were proven to me on a January afternoon.

I put the kids to bed and set up my camera. She didn’t wake up until I kissed her on the forehead and led her up to her bedroom.

I had this image as my monitor wallpaper for a long time. Something in her expression, that old high chair and the complete presentation of all 20 of her digits.

It could be a photograph from the 40’s til today. Classic.

There are birthdays when everything is right. All those pink presents. Nothing is going wrong here. The sun is shining, the sky is blue.

I didn’t have to ask her to smile.

Friends from college…Reminiscing old times. Not much has changed. We have more kids now and some of us are of greater heft.

Almost anytime I photograph these two they hug. It’s either how they want to be remembered or their instinctual response to a camera lens.

A day so happy.

Fog lifted early, I worked in the garden.

Hummingbirds were stopping over honeysuckle flowers.

There was no thing on earth I wanted to posess.

I knew no one worth my envying him.

Whatever evil I suffered, I forgot.

To think that once I was the same man did not embarass me.

In my body I felt no pain.

When straightening up, I saw the blue sea and sails.

Glen Canyon Dam is one of the most stunning sites I’ve ever seen. It is straight down on all sides. Grace is looking confidently down the 900 foot drop from the visitor walkway on the bridge.

It’s pointless for a kid this small to wear shoes. They just pop off so easily.

The Temple of the Sinawava. This was right from the trail. Its hard to shoot with a baby in a backpack though.

These boys jumped straight down off that play gym when I said “OK. Thanks”

I love walking around the towns in Mexico. I came across this office park in Puerto Vallarta and was enchanted by the strong light.

Jack doesn’t really need to wade this deep to get a clean bucketful of seawater for his sand castle’s mote.

Puerto Vallarta is a charming seaside town. I found myself watching the gorgeous birds soar.

If there is a definition of decadent luxuriousness this would be the picture in the dictionary. Wow. That is a full sized, sheet clad queen sized bed elevated off the surface of the offensive sand. Drop down those shades and privacy, breezes, salty air and beachside service are yours.

The only problem is the journey by car to get there offers a comprehensive array of poverty, privation and desperate people.

People scoff at the “formal night” on the cruise. I love it. Anytime Sam gets dressed up fancy for me I’ll do whatever I have to do. In this case it’s wearing a suit and tie and stiff shoes.She posed for this picture graciously.

It’s not her normal thing to do, pose for pictures.

Four cousins on a sunlit day preparing for a footrace.

The weekly Family Home Evening was going on. Bailey was trained on the words that Sam was offering about the Atonement of Christ.

The size of a cruiseship is staggering. You lose track of it until you have to pull alongside it in a tender. Look at the size of the people entering the ship on deck 1.

This guy is crazy. That is about 50 feet off the surface of the rock filled water. His business manager was walking around saying “We don’t get a salaries, just your tips for the fun we give to you”.

Favorite photos are hard for me to come by. This one with Grace on my shoulders is my favorite from the entire year. Her fingers gently held onto my ears. Her weight is so slight and delicate.

We walked that way about an hour. I held tight to her ankles, not able to bear the thought of anything happening.

Grace is our most adventurous child. She likes to deadfall from atop several pillows onto the bed. While her eyes are closed.

Don’t go mini golfing with a one year old. We hit our first putts and she ran straight down the hole and collected all of the balls. It was great fun for her.

I lagged behind by one hole and played fetch while the rest of the family played in peace.

Hiking up the Virgin River at the Temple of Sinawava in Zion National Park it a satisfying adventure. Uncle Scott and three of his boys pose for a picture. This is after we walked through the water that came almost up to my armpits.

It wouldn’t be that bad but with a baby in a backpack and my camera it was difficult.

Lake Powell is one of the most fantastic places in the West. Jack swam in its 78 degree water at every turn. Those bushes in the background along the waterline are where my nephew, Justin, spend two hours sitting in the water, watching people on jet skis go by.

Scott said he was lurking there like a gator for his prey.

This photograph makes me smile every time. Grace listened to Jack clear through that entire book.

My brother, Josh is a fine golfer. He is patient enough to let me photograph his intense approach shot at Shadow Valley.

Saint George Utah and the surrounding area are so full of beautiful places that the little State park Snow Canyon is overlooked. We took a hike around it and the kids paused in a slot canyon for a photograph.

Lily and her pal, Lydia spent many, many hours laughing and holding hands. This is at the family reunion.

Lily’s tea partygoers were kind enough to stand still and hold their baskets of goodies. They were invited to wear their “fancy clothes” for the kids it created a situation of peace.

Those little people rose to the occasion and brought their best behavior too.

Looking out my balcony window after a fine day of relaxation and entertainment I was sobered to see that big ole ocean lurking beneath my feet. Dark and unsettled.

There I was freshly showered and dressed in my finery gliding effortlessly through  1000 feet of salt water on a giant cruise ship.

This is an example of a classic Mormon family. Happy, healthy and glad to be together. No frills, presumption or ulterior motives. The basic unit of society. Spread out in a straight line for your examination.

Kevin (Dad) used to fly fish or hunt at any opportunity, he pretty much laid all that aside to raise up his kids. He’s wearing his fisherman’s shirt and his river shoes to remember though.

Another photo on the cruise. The continuous fantasy that Sam has doing her daily toil is to “sit in the quiet and read a good book.”

The Saint George Temple was the first Temple dedicated in Utah, not the Salt Lake one. It is a gleaming, white structure. It is built on an extremely deep and dense lava rock footing.

They dug deep into the swampy ground and poured and pounded lava rocks down with an old cannon that was rigged to an “A” frame support stucture. The visitors center had the old cannon on display. more facts here

Sam makes the tables pretty for every holiday. The kids don’t really care. They just do whatever they want and leave the mess.

Zach and Nikki got married two weeks ago. Congratulations!

Our fourth of July fireworks display is a pyromanics delight. Mortars, saturn missles, bottle rockets and everything else randomly lit and enjoyed. This year Zach told us that he was going to “sit with Nikki this year”.

10 minutes into the display he came running up to help. Its tough to miss out on things like that as a guy.

Thanks for coming by to see me. I am a American living in Toulouse France for a while with my family. But I’m from Boise, Idaho.

I write about France, traveling, being a dad, raising kids, married life and random observations.